I have in the past tested various PAG lubricants, for various purposes. I always found them less than ideal for refrigeration work.

The PAG line of refrigeration lubricants has been augmented by a new type - DEC PAG. DEC stands for Double End Capped - an arrangement of the molecules that keeps it from polymerizing with water in the system. I decided to test the DEC material against the older PAG oils. Since the difference was so dramatic, I will dispense with the laboratory balance and other dry analytical data, and focus on the images from the test. 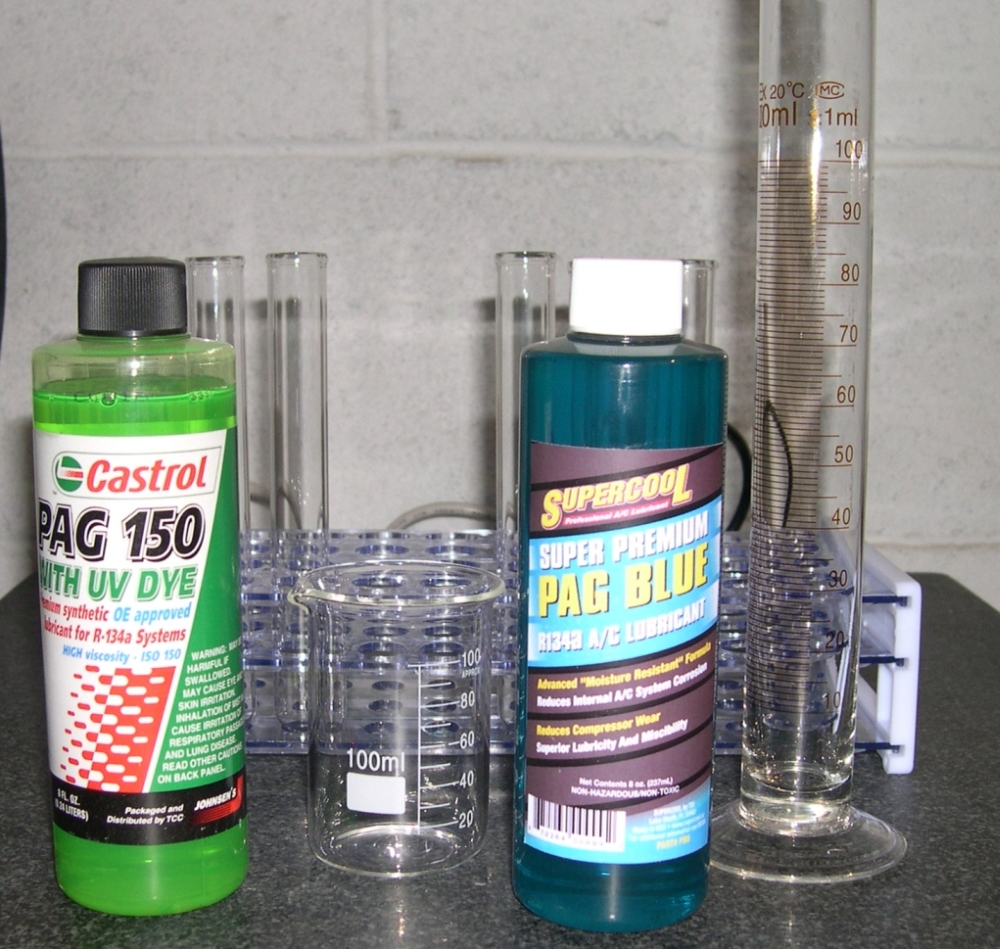 The blue dyed material is a DEC PAG, the green is not. 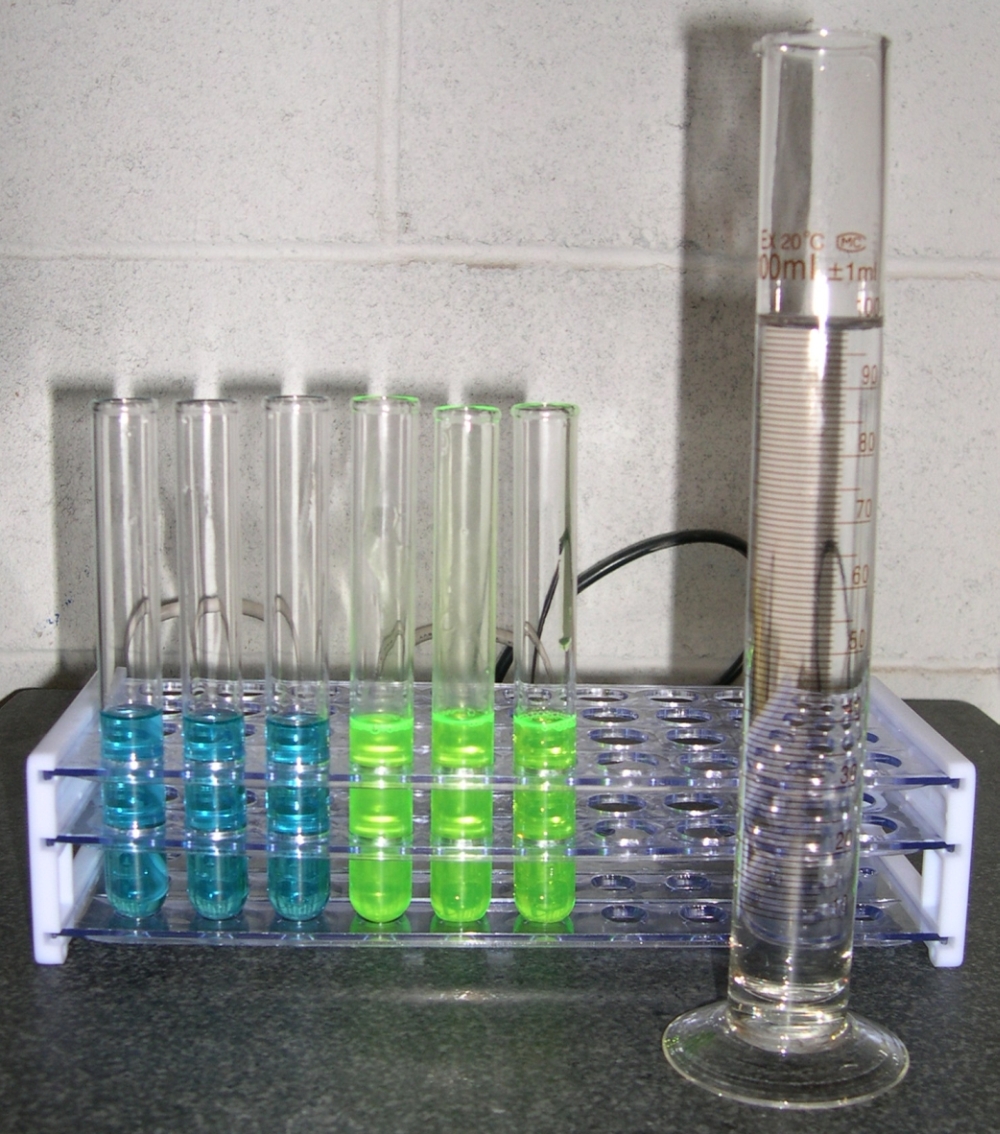 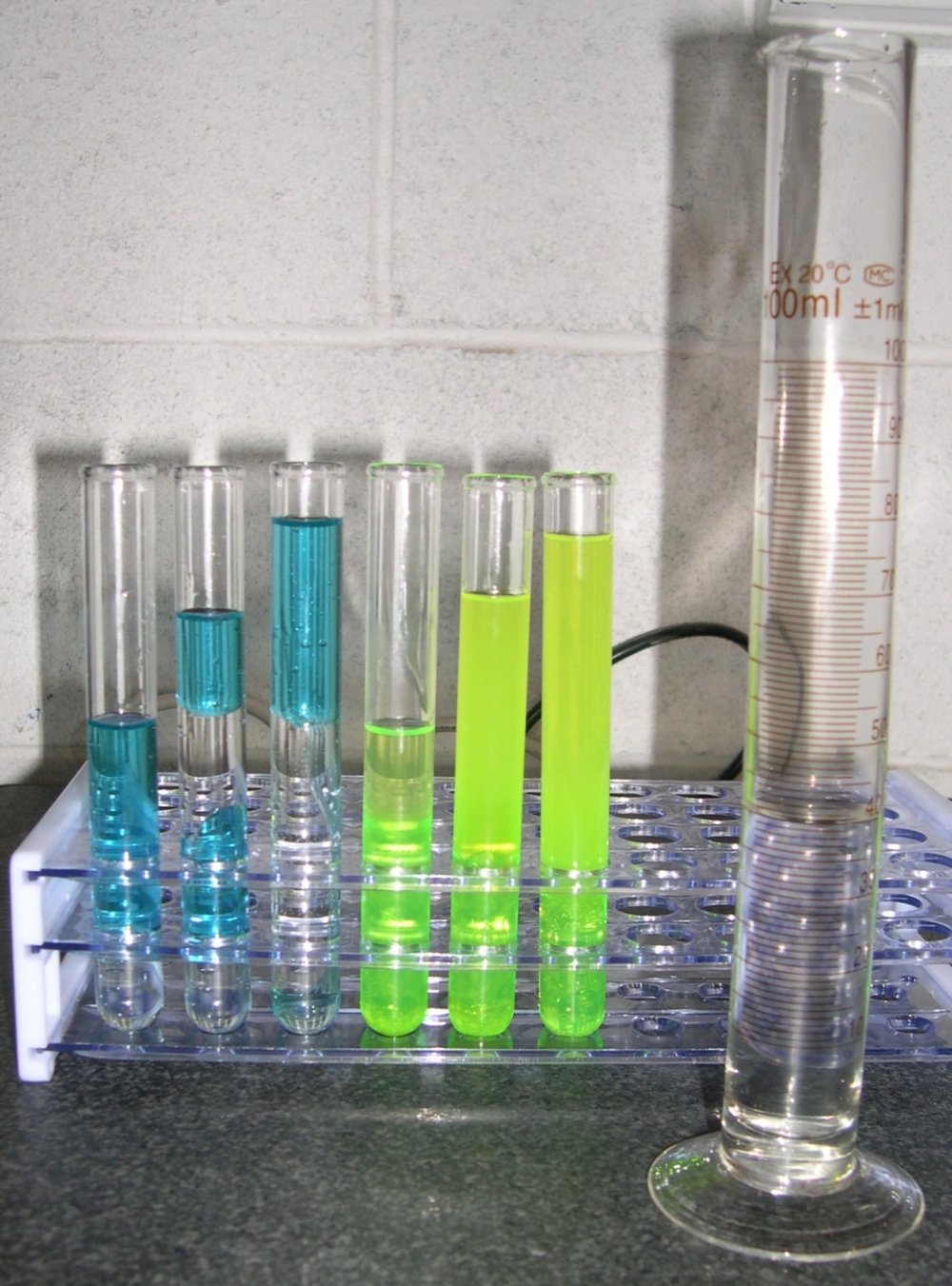 Just the addition of water, and the old type PAG began to mix. The DEC pag resisted mixing with the water. But, a refrigeration system is anything but static,
so some agitation was in order. 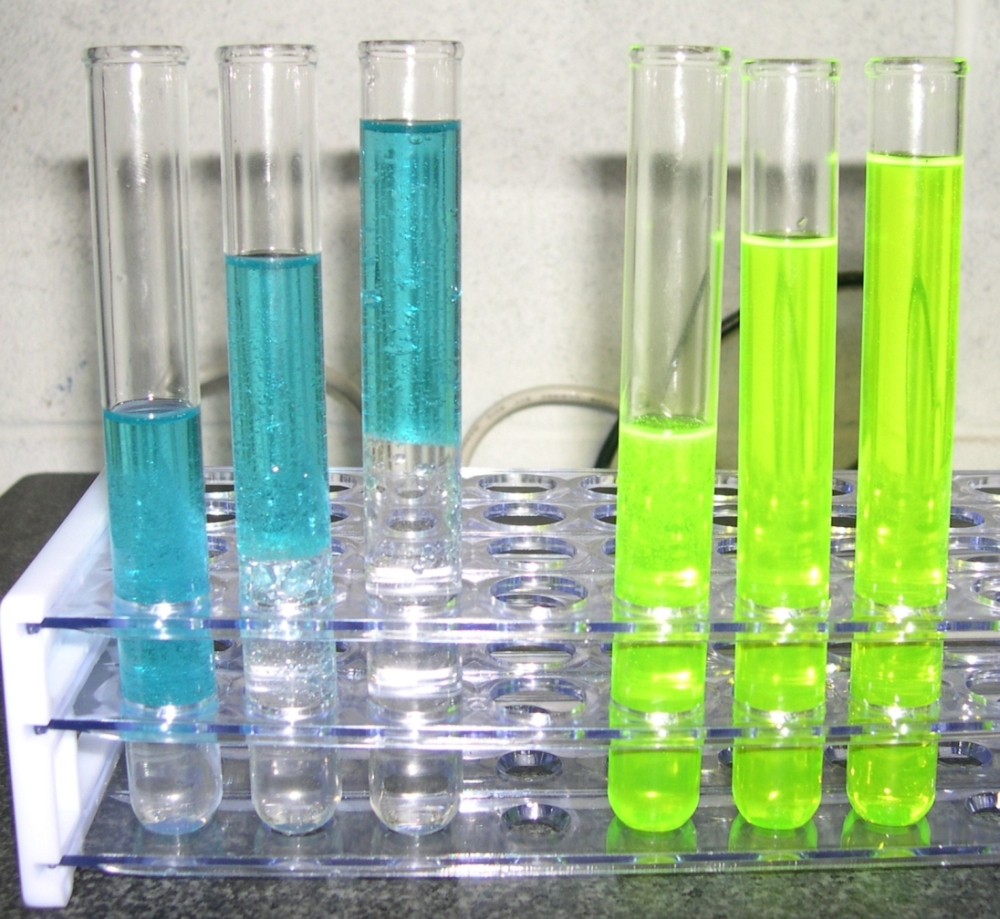 After agitation, the DEC material entrained some small drops of water, but began to separate quickly. The standard PAG mixed so completely, it looks much
like the pure material in the bottle. Actually, it more than just "mixed". It polymerized. A substantial rise in temperature was noted in all three of the green test tubes
when agitated. The more water there was, the higher the temperature after agitation.

A couple of closeups, taken 2 hours after agitation 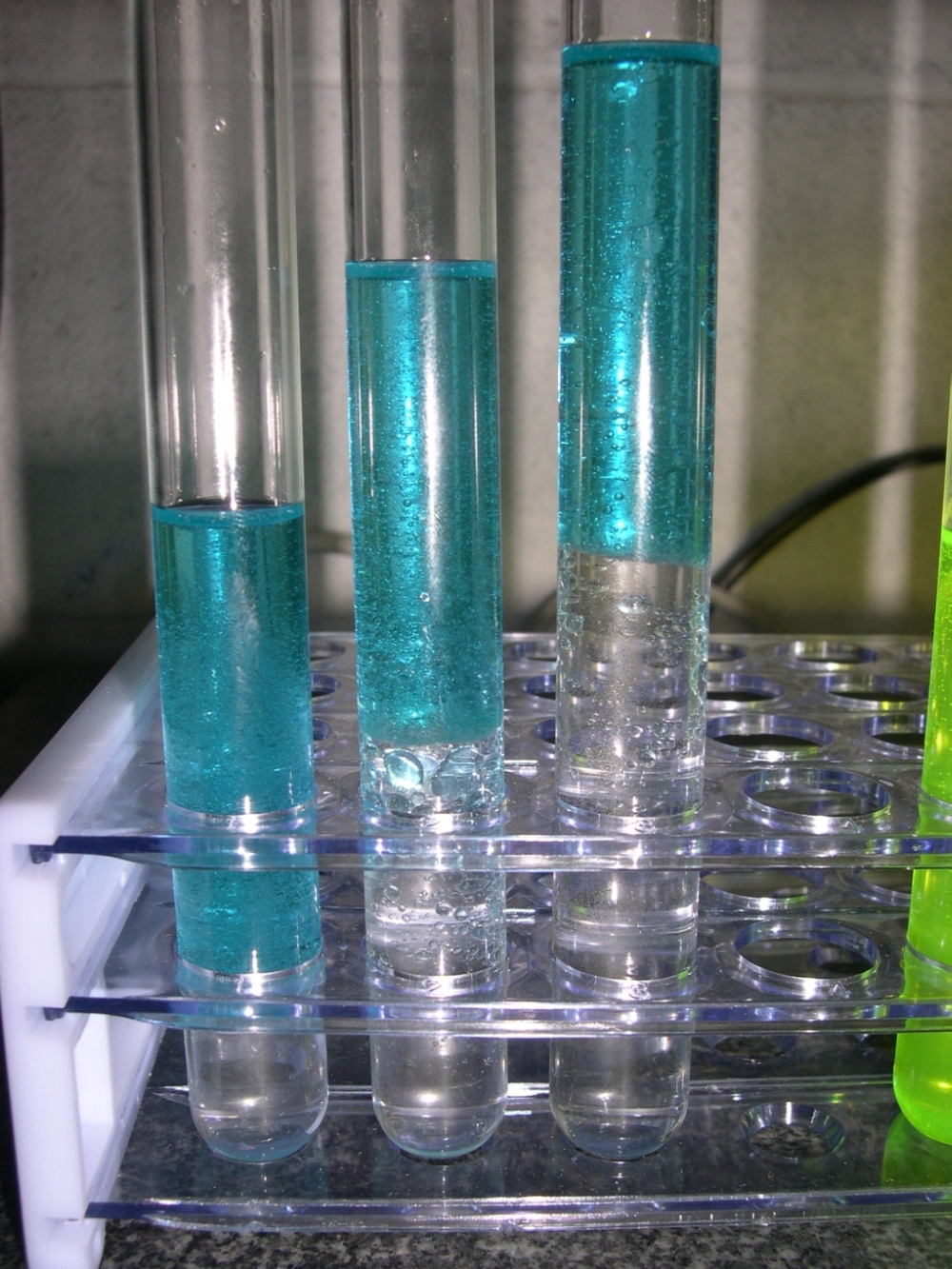 Ok, so the oil absorbs water - so what? Well, the downside of using your oil as a desiccant in a refrigeration system is that it seriously degrades the lubrication
capacity of the oil. A Falex test is not a pretty graphic, but I will tell you that even 10% water hurts the lubrication a LOT. There is another issue with moisture
contamination in PAG systems... Freezing. Adding water to the PAG will raise it's freezing point significantly.

The 75% tube was placed in a 20f test chamber for 12 hours, along side a pure sample of the same material 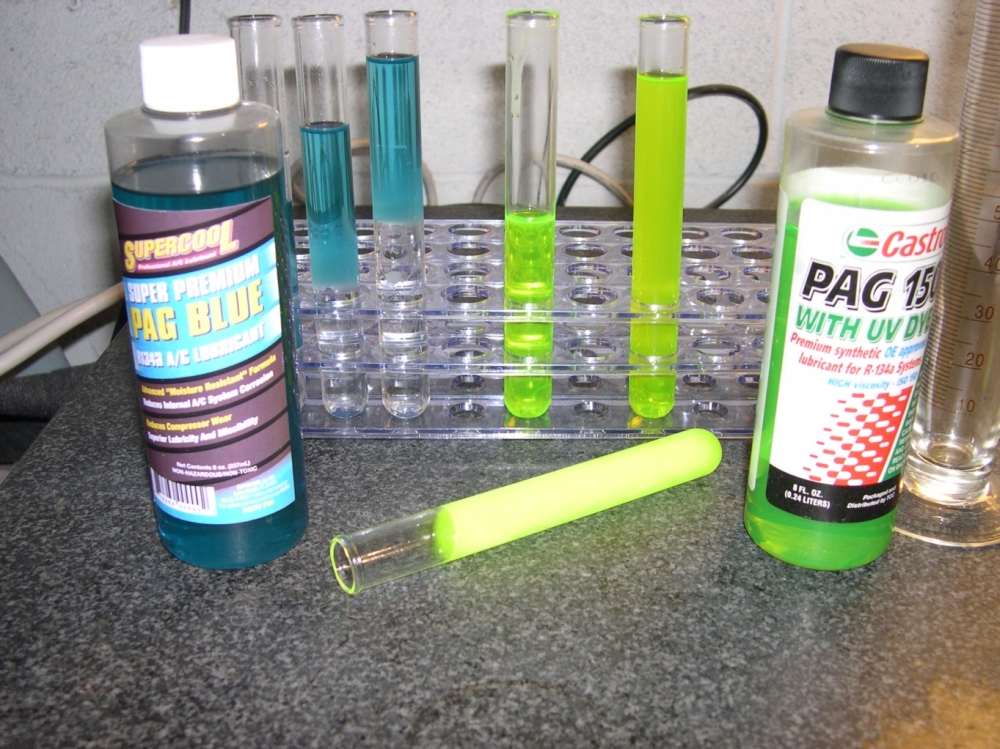 Look! A popsicle! The pure sample is not displayed in a similar fashion, because I did not want to clean up the puddle - it still poured well, at the same temperature.

With badly contaminated PAG, you could have expansion device freezing just like having water in the system - except no amount of vacuum will remove it! This is one of the big reasons we keep telling people to flush a system to bare metal. If you replaced the dryer on a system with wet PAG, you may have the same issues that caused you to open the system in the first place.

The DEC PAG is a HUGE IMPROVEMENT over the other type of PAG oil on the market. It obviously did not polymerize with the water.

All Six samples were weighed then placed in a vacuum chamber, and held at 400 microns & 72f. After 12 hours, they were checked for weight. The DEC PAG was slightly less than it's original weight before adding water in all three tubes. The green PAG did not give up even one molecule of water (well perhaps some molecules, but not enough to see on a laboratory balance).

The green PAG tubes were returned to the test chamber, and evacuated to 400 microns. The chamber was raised to 100f, and ignored for 72 hours. The tubes, when re-weighed were within 2% of the weight when placed in the chamber for the first time.

If you must use PAG, make sure that you are using DEC PAG. If you open a PAG system, be sure you have flushed it to bare metal before you re-assemble it.

If you have an open bottle of old PAG laying about, mix it with water 6:1, and use it for cutting oil in the shop. That is still the major industrial use for PAG, as a water mixed machine tool coolant & lubricant. It works great in a pump sprayer ar the drill press...

Back to Automotive Air Conditioning Procedures, Tips and FAQ.